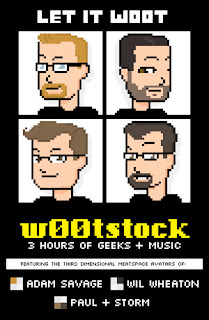 So I went to a little show called w00tstock on Wednesday night in LA with a couple of coworkers. I originally learned about the group that does w00tstock just after they did a show in Minneapolis. Boy was I bummed that I had discovered them just after missing an opportunity to see them. Luckily, most of the show's participants live in CA, so I knew that I'd have an opportunity sooner or later, assuming that some shows would be during the week. Then, a couple of months ago, they announced a show in LA. I was so excited! I bought a ticket the same day they went on sale and practically counted the days until the show.

Before I get into the details of the show, let's do a little background on it. w00tstock, in case you didn't know, is a comedy/music show founded by Wil Wheaton, Adam Savage and the song duo Paul & Storm. It's kind of a nerdy variety show. They do a lot of music, standup and show funny videos. You can go to their website if you want more detailed information on the history and such. You could also use the google and the youtubes to find more information.

So, last night my coworkers and I left work, changed and headed to downtown LA. It took us about seventy-five minutes to drive the thirty some miles to the area that the show was located. One of my coworkers had done some research and found a decent restaurant within walking distance of the theater. It was called Norm's Restaurant and is on La Cienega Blvd. The food was excellent. I had a really good French Dip sandwich (probably the best I've ever had).

After dinner we walked to the theater and got our seat assignments from will call. The theater is called the Coronet theater. They have two show rooms, w00tstock was in the Largo room. Their website says that it seats around two hundred eighty people, so it was a very intimate show with a lot of crowd interaction, which was part of what made the show so great. I imagine that w00tstock could have probably drawn a thousand people or so, but that would have been too many, in my opinion.

My memories of the show are still blending in together into one big happy memory, which hinders my retelling, but alludes to what a great experience it was. I started the evening a little disappointed that one of my personal heroes, Wil Wheaton, was not going to be performing (he's filming Eureka in Vancouver), but I quickly got over it. I was also expecting to have parts of the show where I was bored or at the very least only mildly enjoying myself. It just wasn't true. I thoroughly enjoyed the whole show. Even the people I hadn't heard of before the show were very entertaining and the only time I ended up being bored or not entertained was during the intermission. I can tell you that I will be seeking out material made by the artists and such that performed from now on.

There were a lot of highlights. One of my favorite moments was Mike Phirman singing Chicken Monkey Duck. I'd seen the video online, but it was so much better live. Another highlight was the Pi song, by Hard & Phirm (Chris Hardwick and Mike Phirman). Chris Hardwick's monologue was good as was Adam Savage's. All of the music was very good. Some of the other artists (all good) were: Garfunkel & Oates, Molly Lewis, and Eric Schwartz. It was pretty awesome to see Dr. Demento live and hear some excerpts of songs that he's played in his forty years of broadcasting. Also, Weird Al showed up to pay tribute to Dr. Demento too! The crowd cheered for at least a couple of minutes when he came bounding onto the stage. A fun time was had by all.

If you ever considered going to w00tstock, don't hesistate! Even if you are not of the nerdy persuasion, you should go. It's a lot of fun and even though a lot of the references are nerdy in nature, the music is good and the comedy is good. I think that everyone would enjoy the event.
No comments:

So we've decided to start thinking about moving. Our destination will probably be Eagan at this point. There is a lot of draw to Eagan for us. One, my work is there (even if I'm not there that much); two, we have friends who live in Eagan; three, it's closer to everyone we visit a lot than Hastings is.

What we really need is more space. Our house is two bedrooms and one and a half baths. When we only had one child, this was fine and even now it's ok, but the kids are sharing a room and it's getting harder to manage their sleep schedules in the same room. Lately Kate has been waking up when Ben wakes up early. It's fine for Ben, he takes one to two naps a day as necessary, but Kate should really be sleeping longer in the mornings than Ben sleeps.

So, I'm hoping to find a house that is at least three bedrooms. Honestly, I would like to have a four bedroom so that we can have an office/guest room. A two car garage at a minimum, but a two and a half would be nice. Two bathrooms would be good too, but I think we could live with one and a half. I'm not going to put our target price range on here, but we can afford a bigger mortgage now since interest rates are lower and, frankly, I make more now than I did three years ago when we bought our house. Plus, if we buy a single family home, we will not be paying an association fee, that's just more money we can put towards a mortgage. A big yard (or at least any yard) is also very important. You don't realize how important until you've had to live without one with two small children for over three years.

Now, here are the problems we're facing. One, our house is worth about twenty thousand dollars less than we bought it for, if you take the optimistic look at our situation. Two, there have been anywhere between three and eight houses for sale in our neighborhood at a time over the last year. Many of them still haven't sold and some were taken off the market after not selling. Others went up for forclosure after not selling. So, the competition will be fierce to sell around here.

Our solution is pretty smart, I think. Janice's mom will be soon putting her house up for sale. Her neighborhood doesn't have as many houses for sale and her realtor is confident that she will be able to sell soon and at only a small loss. When she sells her house, we will find a house and put an offer down. We will then move out and Danita will move into our house and rent it until it sells. We figure that it will be easier to sell with a single woman living in the house than it would for a young family.

Hopefully, that puts our timeline for moving at the springtime. I'm very excited for this opportunity to get out of our house faster than we could have otherwise. I think that without Danita's (Janice's mom) help we would be stuck trying to sell our house for months (or longer) before we could get out of it. That includes months of constantly keeping our house spic and span just in case someone wants to look at the house. Ugh, I was not looking forward to doing that and I shudder at the thought. I would like to give a quick shout out to Danita, the best mother-in-law that a guy could ever ask for!

So, if anyone is looking for a nice townhouse in Hastings, please let us know! I know of two that are great that could be yours! All joking aside though, I know that in this age of the internet, word of mouth and networking are very important. If you do know someone who might be considering a move to or around Hastings, let us know, or let them know about us. I'll post Danita's listing as a comment as soon as it's up.
No comments:

Email ThisBlogThis!Share to TwitterShare to FacebookShare to Pinterest
Filed under: house

The post below this one is the prologue to the novel that I'm trying to write. Please read it and if you have some feedback, leave a comment! Constructive criticism is never ignored and always appreciated!

A little background: I've been contemplating writing a novel for a very long time. I've written dozens of short stories, but they never told the whole story as I saw it in my head because of the short format of a short story. A novel seemed like too monumental of a task for me, but the feeling that I have stories to tell just never stopped and so I just started writing one day earlier this year.

I'm about halfway done with the novel. It's mostly a science fiction book, but I'd like to think that it will appeal to more than just sci fi geeks like myself. It's not overly sciency (is that a word?) and it's not too far out of the realm of plausibility.

The reason that I'm sharing the prologue here is that I'm absolutely dying to share the story with the world, but I know that I have to wait until it's complete, so I decided that it couldn't hurt to share the prologue. It's one part of the story that I'm particularly proud of, and isn't likely to change from here to publication date (if that ever happens!). I hope that you like it!

Favorite song of the moment: Spamtec - Come Around
No comments: