The Cloud - A Breakdown and Opinion

So, a few weeks ago, Apple announced iCloud at E3.  Amazon launched their Cloud services earlier this year.  The "Cloud" seems to be the current hype nowadays in many technology fields.  Even in insurance we've started getting questions like "Does Wynsure take advantage of Cloud Computing?"  You might be saying, "What does that even mean?"  Well, in this post, I will explain the "Cloud" and tell you about the pros and cons of using it, as I see them.

What is "The Cloud"?
The Cloud is really the Internet.  I remember from my networking classes, several years ago, my professor talking about the internet was like a cloud.  You couldn't see all the little parts (like the raindrops in a cloud) from the outside, but you knew that they were there.  So, when Amazon or Apple talks about storing your data in the "Cloud", they are talking about storing this information on the internet somewhere.  What you need to know is that your data will not be floating about the internet.  It will be stored on secure* servers owned by these corporations, but accessible from anywhere you would have access to the internet.  While "the Cloud" has become mainstream, the concept of the cloud is quite old.  Organizations have been using the cloud for decades.  SETI has been using "Cloud Computing" for a long time to try and find hidden radio transmissions in all of the static and background noise of the galaxy.  Apple and Amazon have opened this up to the public for several reasons: hardware is cheaper than ever; they see a demand for this with all of the handheld devices out there; it's another easy way for them to charge whatever they want for a service that costs them very little (relative to the potential income).

Pros to using the Cloud:
1. Using the cloud will allow individuals and corporations to offload the costs of hardware maintenance and upgrades.
2. Cloud services are guaranteed not to ever have data loss**.
3. Especially in the case of iTunes using the cloud, you would never have to buy songs over again.

1: If all of your files are stored in the cloud, you don't have to have as much hard drive space on your servers and personal computers.  In fact, Apple is planning on launching a laptop that doesn't come with a hard drive that uses the Cloud to store the users' files.  This would be cool since you wouldn't have to keep buying bigger and bigger hard drives to store your ever growing library of ripped music and movies.  They would just all be out in the cloud.

2: Corporations spend a lot of money on fail-safes and backups to prevent data loss.  Recovering data after a loss is also very expensive.  This one is kind of an extension of #1, but I wanted to call it out specifically because most people ignore backups until it's too late.  I know that I am guilty of this as well.

3: I have songs that I know that I've purchased from iTunes, but I can't seem to find them on my computer.  So, I just haven't bought them again.  I'm sure that I'm not alone in this.  Also, Apple has offered to upload your non-purchased music to the cloud and they will allow you to count them as purchased if you pay their yearly service fee.  This in particular interests me.  I know that I have over 10000 songs in my library at the moment, but I also know that I've probably lost a couple thousand to moves from computer to computer.  Apple's service would prevent that loss.

Cons of using the Cloud:
1. Losing "possession" of your data.
2. Tracking my use and files.
3. Securing my data.

1: This fear of mine might be a little paranoia, but I'm worried that if I'm storing all of my files in the Cloud (like if I used that particular Apple laptop), couldn't Apple do whatever they want with my files?  If I have a particularly nice picture, couldn't Apple take that picture and sell it to an advertising agency?  Now, you might say something like, "They can't do that.  In their Terms of Service, they state that I retain ownership of my files."  Well, let me tell you two things about that my friend.  One, "possession is 9/10 of the law".  Two, Terms of Service change all of the time.  You may or may not have heard about a recent change to Twitpic's Terms of Service.  In it, you still retain "ownership and copyrights", but in the same Terms of Service you give Twitpic the rights to sell your photos.  That's some doubletalk right there.  Once whoever has your files, how are you going to be sure that if you end your contract with them that they aren't keeping your files?  There's no way to be sure of that.  In fact, they'll probably tell you that they're keeping your files for in case you want to join their service again in the future.  That just rubs me the wrong way.  I don't trust it.  Of course, I do recognize how untrusting and crazy this might sound.  I probably sound like someone who refuses to put any of their money in the banks.

2: Just think about it, if Apple and Amazon can track how many times you've played a particular song, isn't that the perfect market research?  Then, they can pitch you the artists (or e-books, movies, etc.) that match your plays.  Maybe that's not all bad, but I don't like having my activities monitored that closely.

3: With all of the hacking that's been going around lately (LulzSec and Anonymous and the other hacking groups targeting large corporations), eventually someone will hack into Amazon's or Apple's cloud servers.  Mind you, this isn't an "if", it's a when.  Now, how deep they get in is really up to Apple and Amazon (and whoever else starts offering these services).  Security is something that is often overlooked by a lot of companies because it's expensive to maintain and there are so many vulnerabilities being discovered all of the time.  Frankly, that's part of what would motivate a corporation to use a Cloud service in the first place.  But, how am I going to be sure that the data is secure?  After all, I would have thought that a huge technology company like Sony wouldn't be vulnerable to the most basic of exploits.  Let's just hope that Apple and Amazon learn from the mistakes of others.

Conclusion
So, will I be jumping on the Cloud bandwagon?  Not if I have a choice.  It's just not worth the risk and unknowns to me.  On the other hand, I've heard rumors of the WiiU using the cloud to store your game saves, and I would be alright with that.  My Wii has run out of hard drive space and that wouldn't be a worry then.  Will I be uploading my gigs and gigs of music and movies to Apple?  No.  Maybe (and that's a big maybe) once the service has proven itself.  For now, please excuse me while I go bury my files in my back yard.

*See part 3 of the Cons section.
**There is no such thing as "no data loss".  Servers and hard drives die, it's a fact of life.  Cloud services will obfuscate this so that you never see the data loss.
No comments:

Email ThisBlogThis!Share to TwitterShare to FacebookShare to Pinterest
Filed under: explanation, review, technology

I've been following the "a LEGO a day" blog for a while now and if you like LEGO, you should check it out. Since before Janice got her new awesome camera, I've been wanting to try to take similar pictures with my personal collection of LEGO minifigs. So, before we moved I tried with her old camera. The outside pictures with the skier came out great, but the indoor ones that I tried didn't come out so well.

A few months later, I bought Janice her camera for her birthday. After that, we moved and a couple of weeks ago I tried again. Most of the shots I took with the new camera didn't come out. Apparently, having glasses is a big disadvantage when trying to manually focus the camera. Below are the fruits of my efforts from both tries. 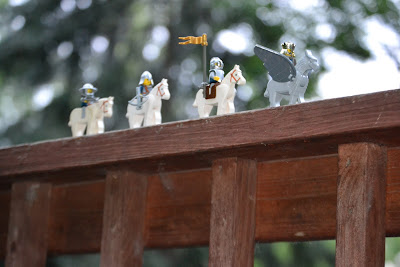 Caption: The King leads his men across an old bridge.
Notes: This is the minifigs on the rail of our deck. I tried to focus on the king and have the knights be out of focus. 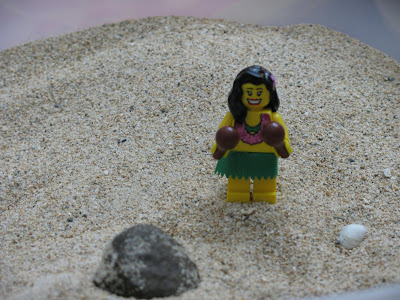 Caption: Halia is ready for the luau.
Notes: The minifig is standing on sand that we brought back from our trip to Hawaii. 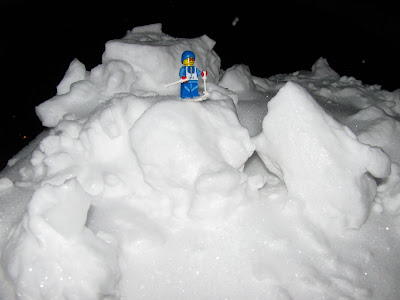 Caption: Rick out for a midnight ski.
Notes: Taken with the old camera at our Hastings house. I think that the skier pics turned out great. There are three more below! 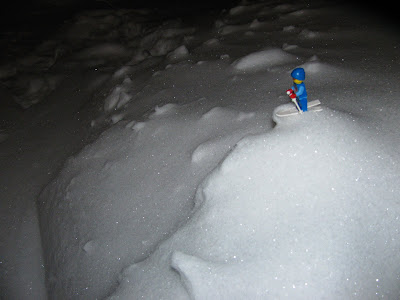 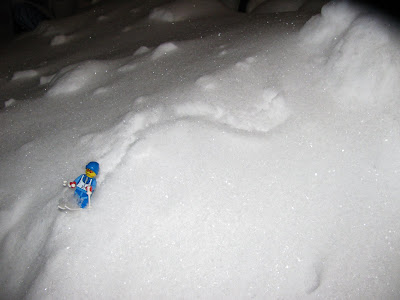 Caption: The powder is awesome! 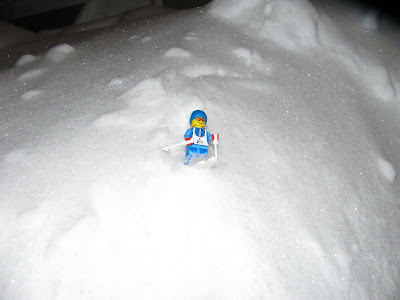