What can I say about Oahu except that it is totally awesome! Well, lot's of things, really. This post will recount some of our vacation and tell you a little about the island.

As many of you know, my wife and I recently went on a vacation to Hawaii, in particular the island of Oahu. Oahu is mostly known for being the home of Honolulu and Pearl Harbor, but it definitely has a lot more to share with visitors than just that. I will talk about that more below. It was my first time to Hawaii, but Janice had been to Maui some time ago, just after we had started dating, so I didn't tag along.

Below I'll talk about some of the activities we did (I would recommend ALL of them), and some of the things we didn't do for various reasons. There will be a couple of pics for your perusal. My wife planned most of our adventures using Go Hawaii. Some of them we just planned on our own and they turned out to be a lot of fun that way too. 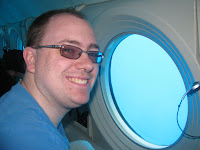 So, we arrived on the evening of Friday, February 4th, just in time to see the sunset from the airport. Needless to say, we didn't do much that night. The next day we had our submarine ride planned for that afternoon, so we spent the morning on the beach. Our tour was with Atlantis Submarine, which Janice found on the Go Hawaii site. We ordered online ahead of time and got a discount that way. The submarine tour with Atlantis Tours was totally awesome! We saw several artificial reefs created by the University of Hawaii and Atlantis themselves. There were a lot of fish and we even saw a sea turtle. The tour guides told us that they have seen dolphins and whales on the tour before. 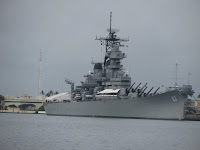 Sunday, we planned to do Pearl Harbor. They sell tours for this, but we decided to forego that and do it on our own. We took the public transit bus from the hotel, which only took forty-five minutes or so (we stayed in Waikiki). Once there, we were free to roam about at our leisure, which wouldn't have been true if we had purchased a guided tour. Some of the tour was a bit sad; there's a video about the attack and the whole monument is a somber place. The Arizona is still leaking fuel oil into the harbor even after almost seventy years. We visited the Arizona Memorial, the Bowfin (a WWII submarine) and the USS Missouri (where the surrender of Japan was signed). If you know me, you know that I love history, so I had a ton of fun at Pearl Harbor. 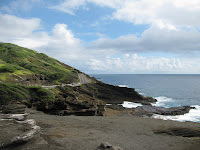 Monday was another ad hoc day. We decided that we would rent a car and drive to the North Shore of Oahu. When I mapped it out, the shortest route was straight through the middle of the island to the North Shore, but when we picked up the car, the guy from Enterprise who processed our rental told us that we should drive up the east side of the island on our way to the North Shore. He said it would take several hours (and it did), but that it would be worth it (and it soooo was). He gave us a map of Oahu with a route colored in and we followed it almost exactly. It was an amazing and utterly beautiful drive. Along the way we stopped at the side of the road countless times to take in the view and take pictures. Once we reached the North Shore, we stopped at Waimea Valley and swam under a waterfall (the water was cold, but worth it!), then we stopped at a town called Haleiwa where we ate dinner and shopped a little. It was getting dark, so the during drive back through the mountains to Honolulu and Waikiki we didn't see much, but that was alright, we'd seen quite a lot of beautiful scenery that day. It was hard to believe that we could drive one hundred and seventy miles on a small island like that! 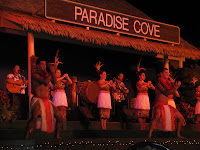 For Tuesday evening we had a Luau planned. We returned the rental car in the morning and spent the rest of the morning on the beach. The Luau was purchased online in advance, so we got a discount. They picked us up at a shuttle stop in Waikiki and drove us out to the west shore where the Paradise Cove Luau would happen. It was a lot of fun, the guide on the bus was hilarious. They had fun activities planned and a big buffet too. 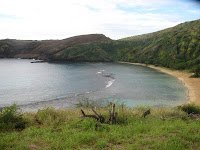 We didn't have an activity planned for Wednesday, so we decided to buy Janice some snorkel gear and head out to Hanauma Bay. The bay is amazing! It was formed from a volcanic crater and has a natural reef in it that the state lets people explore snorkeling or using scuba gear. They have snorkel gear for rent (which I used since I wear glasses). We took two disposable underwater cameras with us (which we used up within an hour). This is another thing that you can do with a tour group, but there's a city bus directly to the bay from Waikiki, so we decided to save a lot of money by doing it ourselves. We had such a good time snorkeling that we came back Friday morning before we had to leave for the airport. 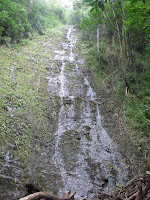 Our Thursday activity was the one that I was looking forward to the most ahead of time. We purchased a Bike & Hike tour online ahead of time (for a nice discount). Basically, they drive you up one of the mountains and you coast down on a mountain bike. Honestly, it was beautiful and exhilarating, but there wasn't much pedaling involved, which kinda disappointed me. For the hike part, they drove us up to the edge of a forest reserve and we hiked up a trail that the company maintains through the jungle. It was a difficult hike, but totally awesome! At the middle of the hike was a two hundred foot tall waterfall!


Oahu is a beautiful island with a ton of activities to do. We didn't do nearly everything that we might have while we were there. One of the things that we missed was the Aloha Stadium Swap Meet, which our Luau guide told us about. Janice had wanted to go, but it's only a couple of days a week and we couldn't fit it in. I had also wanted to visit Chinatown, but it was another thing that we just couldn't fit in. The Honolulu Zoo also called out to me, but they didn't seem to have anything special that I couldn't see at other zoos, so we skipped it. There's also the Polynesian Cultural Center, which I'd heard a lot about, but after listening to some tourists and locals (and seeing the price), we decided to skip it.

It was a very good trip and one of the best vacations I've ever had, and not just because we didn't have the kids with us. I look forward to returning to Hawaii one day, though we'll probably visit one of the other islands instead since I hear that each one is unique.

Email ThisBlogThis!Share to TwitterShare to FacebookShare to Pinterest
Filed under: awesome, hawaii, vacation