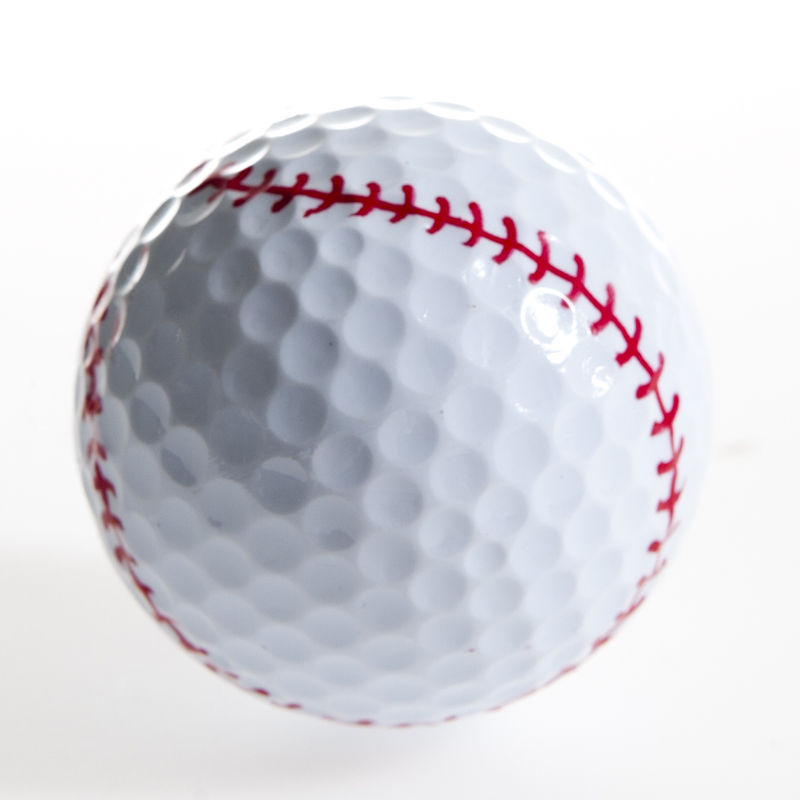 After a while I started to make a game of it. I hit the tennis ball as far as I could, then tried to get the whiffle ball to it in as few hits as possible. It hit me that this goal was the same as golf, so I started making a few rules and came up with Basegolf.

I'm using an aluminum bat, I don't know how a wooden bat would effect the game since I don't own one. If you try the game out with a wooden bat, let me know how it works out!

The rules are simple and designed for solo or group play.  The game is best played in a large space with some obstacles, but probably not a heavily wooded area.

You start the game in one corner of the area you intend to play in.  Make sure all players know what the out of bounds, or foul territory will be as if they hit a foul ball, it will cost them a stroke.  You may decide, however makes sense to you, who goes first. That person will take the tennis ball and hit it as far or close as they want.  The tennis ball is the "hole" that the players must hit their whiffle balls to.  Players take turns "teeing off" by throwing their whiffle ball into the air and hitting it towards the hole.  Then, the players farthest away from the hole take turns hitting until everyone has "sunk" their whiffle ball.  A whiffle ball counts as getting into the hole when it is within a bat's length of the tennis ball.

Putting: You can putt by leaving your whiffle ball on the ground and hitting it with the bat.  I've considered making a rule about how you can't putt unless you're on the "green", but I haven't decided what the definition of the green would be.  If you have an idea, leave it in the comments.

Finishing the game: The game is done when the players want it to be done.  The players can agree beforehand on a number of holes, or you could play the standard 9 or 18 holes like in golf.

Scoring: Count the number of strokes it takes each player to sink their whiffle ball in the hole.  At the end of the game, the player with the fewest strokes wins.

Par: I consider Par an optional rule as it can be hard for a group to agree on what the par should be on a particular hole.  It would be easier if you have a judge, I guess.

Strategies: I've considered a few strategies as I was playing by myself.  One, hit the tennis ball as close to foul territory as you can without being foul.  This has risk, but could be good if an opponent hits foul trying to get to the hole.  Two, utilize obstacles to make getting to the hole harder.  Also risky, but if you're confident in your skills, might be worth it.  Three, bunting or "pitching" can be a good tactic when you're too close to swing away and too far to putt.  Leave any other strategies that you come up with in the comments!

I've played Basegolf a few times by myself, but I think it would be fun with a partner or group.  One warning, I've already broken one whiffle ball in half with my aluminum bat, so that's something you've got to watch out for.  Try out the game and let me know if you enjoy it!